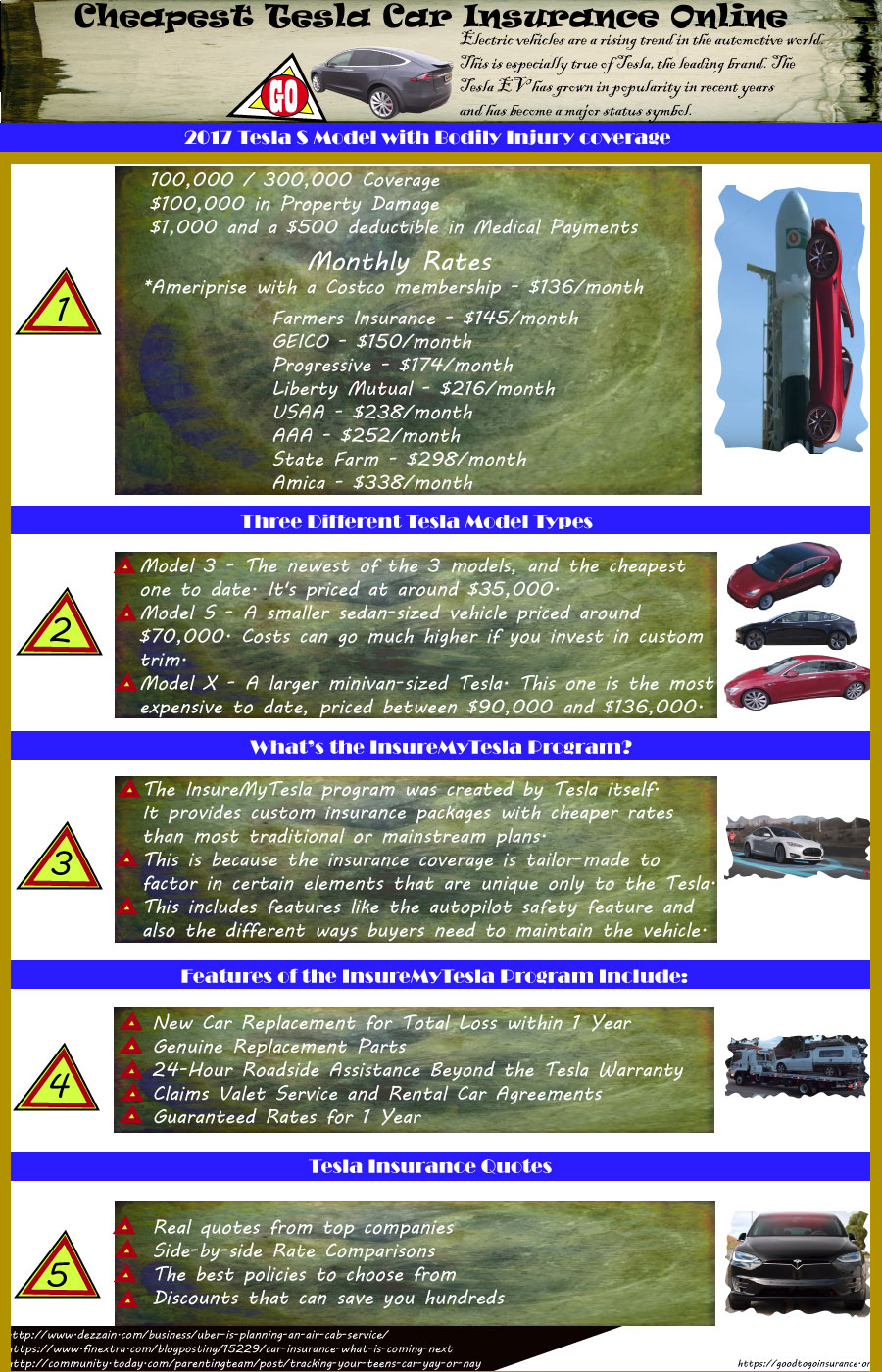 Electric vehicles are a rising trend in the automotive world. This is especially true of Tesla, the leading brand. The Tesla EV has grown in popularity in recent years and has become a significant status symbol. Some consumers have no idea, though, how much insurance is for these unique vehicles. Let’s focus on the cheapest Tesla car insurance and how to save money on coverage.

Tesla’s Popularity Can Be Traced to Elon Musk

Its founder, Elon Musk, widely influence the image of this cutting-edge company. He has developed a way to make electric cars more powerful, faster, luxurious, and highly desirable. If you’re thinking of investing in one yourself, you might be wondering how it is even possible to get affordable insurance for a vehicle like that.

Although Tesla’s are known as the “future’s vehicle,” in most cases, they will cost more to cover when compared to an older hybrid or gas-powered automobiles. While many gas-powered cars can be insured for under $100 per month, you have to get lucky to find rates that low for most Tesla models.

In this article, you can learn how much it costs to insure a Tesla and different coverage options that will help you select the best plan possible.

Tesla has three available models you can choose from. These are the:

As these EV cars have increased in popularity, more people are requesting insurance quotes while trying to find the best deal. This is especially true for the Tesla 3. This is because the Tesla 3 is more affordable to the masses, and more units are expected to be sold. The S and the X are still out of most people’s price range.

Tesla itself created the Insure MyTesla program. It provides custom insurance packages at cheaper rates than most traditional or mainstream plans. This is because the insurance coverage is tailor-made to factor in certain elements that are unique only to Tesla. This includes features like the autopilot safety feature and the different ways buyers need to maintain the vehicle.

The Tesla – Liberty Mutual insurance coverage has forced other providers to offer more competitive deals for these popular vehicles. It has benefited consumers in the way of more choices and lower overall rates.

Some of the best features of the InsureMyTesla Program Include:

Tesla insurance is likely going to cost more than non-electric cars. Before you buy your first Tesla, here are some things you should consider before making a giant purchase leap.

The More Expensive the Car, the More it Costs to Insure

If you are spending more on your car, you will likely pay more to insure it as well. According to GEICO, electric vehicles are 1.23 times more expensive to insure than gas-powered cars. You will, however, find different rates across different insurance companies. This is why it’s so important to review several quotes. Get your free Tesla auto insurance quote with goodtogoinsurance online or over the phone.

Tesla is Considered a Luxury Vehicle

Not only will Tesla insurance be more expensive because it is a costly vehicle, but because it’s classified as a luxurious automobile. Even though the Model 3 is significantly cheaper than its two counterparts, it still counts as a luxury car, and it will be insured that way.

When it comes down to it, you will want to upgrade your insurance to a luxury status to get the best possible coverage for your car. However, you can rest assured that it won’t be as expensive as you might expect. It only costs about 6% more to insure a luxury car than a non-luxury car, so you have a little bit of wiggle room to work with. Let’s take a look at some more details on pricing.

How Much Does it Actually Cost to Insure My Tesla?

In the state of New York, GEICO estimates that a $70,000 Tesla S model will cost about $1,750 per year to insure. The Tesla 3 is newer, so it’s hard to gather accurate insurance information about it. This model has only been released in select markets for several months.

Because it has a lower base price, yearly average insurance costs come in about $1,540, just slightly more than the competitor Kia Soul EV. The Kia EV costs about $32,000, just a little less than the Tesla 3, and costs around $1,446 yearly to insure. The Kia Soul EV, however, is no luxury vehicle.

For the more expensive Tesla models like the S60, the average annual auto insurance is priced around $1,900 to $2,300. The two states with the highest Tesla ownership, Illinois, and California, also offer the lowest insurance rates for these vehicles.

Which Insurance Providers are the Cheapest?

Here are some sample quotes for the 2017 Tesla S Model with Bodily Injury coverage, based on recent research that includes:

Farmers had the cheapest Tesla quote, then Geico and Progressive. Liberty Mutual came in a distant fourth, despite having an exclusive insurance deal with Tesla. Amica came in last, with rates more than double those of the top 2 finishers.

Buy Direct and Save Big

You can get the cheapest Tesla car insurance online by applying for direct quotes. Get up to 10 quotes for any Tesla model using your smartphone, tablet, or laptop at Good to Go Insurance. Compare the lowest prices for the coverage you want across all the major national insurers. Once you find the right carrier and plan, you can buy coverage direct.

Get Tesla Insurance Quotes in Less Than 5 minutes:

Apply today and get Tesla coverage for less.