The 5 Dumbest Things People do While Driving

The 5 Dumbest Things People do While Driving 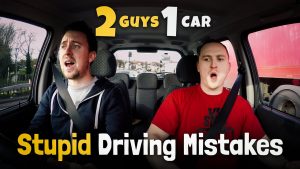 Have you ever been precisely in the center of your lane, driving down the road, when a car drifts over and almost slams into your vehicle? Maybe it is just me, but there seem to be more distracted drivers on the road today than ever before. Dangerous driving can have a deadly effect on innocent motorists. It also drives up car insurance rates for all of us, which is not fair for safe and responsible drivers.

While there have been numerous laws passed in recent years to combat this issue, it is not going away anytime soon with all the technology addicts on the road. Let’s take a closer look at the 5 dumbest things people do while driving.

Once you check out all of the crazy things people do in their cars, then get a free online quote from good to go insurance, and you’re good to go. Most consumers with an average DMV record can save around $550 annually. 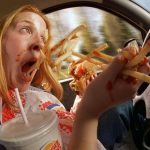 In some way, almost all of us have committed this mistake at some time. You oversleep and have less than 10 minutes to get ready for work. There is no time to make a decent breakfast, so you throw some toast in the toaster, grab a muffin or two and head out the door. Now, eating a muffin or toast behind the wheel is not so dangerous, but I have seen people put toppings like jelly or butter on while going 60 MPH! This risky behavior takes their attention off the road, and in just a split second, anything can happen. People have slammed into vehicles ahead of them when traffic suddenly slows down because they are too busy trying to prepare food when they should be 100% focused on the car in front of them. Aside from chewing gum, don’t eat and drive. 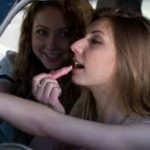 A few years ago, a lady in a giant Cadillac almost side-swipe me because she was trying to comb her monstrous hair makeup and put on makeup while operating a car going about 45 mph. It’s wise to check your rear-view mirror for vehicles behind you frequently, but it is never wise to use mirrors in your car to fix your hair or put on lipstick. This body grooming in the car can lead to serious incidents and even death. Don’t take this dumb risk and stay safe on the road.

Reading Behind the Wheel 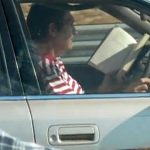 Back in Los Angeles about five years ago, I was on the 405, and traffic was stopped and go but still moving. I looked over to my left, and a gentleman had the newspaper spread out over his steering wheel. He was driving with one hand and occasionally looked up. This behavior is so stupid. At any moment, he could have lost track of the cars in front of him and crash. Even a mild accident going 15 MPH can cause serious injuries.

This is a massive issue for young people that has sadly cost thousands of lives. Texting is as dangerous or more so than driving intoxicated. Kids feel the intense need to reply instantly to the most mundane things, even if it sacrifices their safety. Even though lawmakers have passed strict texting and driving laws, teenagers seem to ignore them, and the problem is only getting worse. If you have to text, pull over, stop your vehicle and only then send out texts.

It is by far one of the leading causes of death in the US each year. Thousands of people lose their lives because of these selfish people that drive while drunk. If you go out and party use always assign a designated driver and never get behind the wheel if you have had more than one drink. It can save not only your life but also the lives of other innocent motorists.

Now that you have checked out the 5 dumbest things people do while driving, here is a helpful tip on how to get lower insurance premiums. Just take a few minutes and get quoted with Goodtogo Insurance. With direct rates, you can save hundreds yearly, and that is just plain smart.